Kathleen Fitzpatrick makes a compelling case for the need to reform university publishing. She starts with ways to revise the peer review system, and advocates for post-publication, “transparent” review rather than pre-publication, anonymous review. She navigates multiple levels throughout the book: broad forms of institutional forms of resistance – epitomized by the motto “This Is How We Have Always Done It” – but also individual anxieties triggered by the destabilization of the notion of authorship. I also appreciated her relatively balanced view on technological innovation, as she addresses the potentialities, but also the flaws of different initiatives (Slashdot, Philica, MediaCommons, etc). The politics of it all come to the fore in the last chapter, when she expounds the problems related to the trade-oriented model of US university publishing that came to prevail in the 20th century, and what to do to reconnect university press to the university community.

I shall here focus on the way Planned Obsolescence came to existence. In her conclusion, Kathleen Fitzpatrick explains the peculiar genesis of her book. After submitting her manuscript to the publishing press, she posted it online. It thus received both “traditional” and online peer review. By engaging in such process (and reporting on it), Fitzpatrick crossed the bridge between theory and practice and directly put to the test some of the ideas expounded in her book. While going over the online draft of the book, I was struck by the overall quality and supportive tone of the comments it received there. Fitzpatrick’s dual peer review experiment was able to reconcile both models of peer review for the best, perhaps because they were articulated as to be complementary while sharing a same purpose, and not in competition. A key element – and limit of the experiment, perhaps – is that Fitzpatrick got to decide on the “first circle” of reviewers. It is likely that this selection at the outset of her experiment shaped the ensuing audience, paving the way for “sharp, thoughtful criticism to make the project better” (190). As a matter of fact, the online comments she got seemed overall much nicer than anonymous feedback from journals I have read (and no need to say, much, much nicer than the average comment you get online these days). Yet, does such process of cherry-picking one’s reviewers really stand for open peer-review?

I also could not help thinking of Fitzpatrick’s early example of dual peer review in the light of the most recent Hypatia Transracialism Controversy. Instead of fostering “sharp, thoughtful criticism to make the project better”, the social-media response that followed the publication of an article on transracialism in a peer-reviewed journal (Hypatia) plainly aimed at having this article deleted. This was a textbook case of technological disruption, inasmuch as I properly understand this concept. Some counter-commentators contended that the arguments this campaign was making were mostly baseless and that they provided evidence that some of the most outspoken opponents had not even read the article they wanted to see taken down. Yet the screenshot below shows how hastily a part of Hypatia’s board of associate editors yielded to the bashing (that also included online shaming targeting an untenured assistant professor).Was that the darker side of open peer review we just saw? 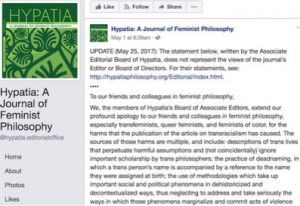 Hypatia’s Facebook page. Part of an apology, posted by Hypatia’s board of associate editors on 1 May 2017, for the publication of one of the journal’s peer-reviewed articles. At the top is a statement, added 25 May 2017, that the apology does not reflect the views of the editor or board of directors (Source: Wikipedia page)