As someone in academia, and who cares about non-academics’ access to information, the first thing that strikes me is that Lauren Klein‘s article is published in a paywalled academic journal, American Literature published by the prestigious Duke University Press. I’m disappointed that she did not contribute the article to her institutional repository. Naughty DH scholar! In contrast, Lev Manovich‘s article is published on his personal website. Self-publishing may lead readers to grant Manovich’s writing to be less authoritative than a refereed journal like American Literature. Also, Manovich’s article is full of usage errors, beginning with the title, “What is Visualization?,” which proper usage would render “What Is Visualization?” The usage errors prompt me to observe that Manovich is a non-native English speaker, having emigrated to the US when he was 21. At the same age, more or less, Klein was graduating from Harvard. Fancy!

I read Klein’s The Image of Absence, published in 2013 first. The 2013 pub date does not tell the reader with certainty when the article was written or what the review process was like. Manovich’s What is Visualization is marked “[March – October 2010],” reporting when he started and finished it–a seven-month period. Given the peer review process, it is likely that it took at least that long for for Klein’s work longer to see publication, and no indication of how long it took her to actually write it.

Klein’s diction while consistently academic, is more narrative than Manovich’s. She begins with a story about Thomas Jefferson and his former “servant.” (Quotation marks denote that James Hemings was a slave, rather than a servant.) The article physically/digitally has wide margins, making it easy to make notes–to interact with the text. Manovich’s margins are narrower, and his diction similarly academic, but more pedagogic. He, too, shares a history of his topic, various forms of visualization: information, interactive, media, network, and science, as well as information design. In contrast to what one might expect from an article called “What is Visualization,” there are no images in the text. There are some hyperlinks (and some URLs that are not hot), but no examples of the visualization types he analyzes. The Image of Absence on the other hand, which if you reversed the phrasing would be “The Absence of Image” contains six images: two of her own visualizations, one screen capture from the database she is exploring, and three credited images from a library and a historical society. Manovich calls attention to concepts with bold type, something that doesn’t happen frequently (at all?) in academic journals like American Literature. I was pleased he didn’t go truly old school and use underlining for anything other than links. Academic journals do not favor typographical emphases, and use italics for words in other languages and when stylistically called for.

Klein, who teaches literature, media, and communication, has a more human feel. She references labor and imagines absent archival figures as ghosts, as if they have, if not corporeality, a shadow that can be seen, if looked for. The computer science professor, Manovich does not speak of end users or of data points as possibly representing human beings. He changes his voice repeatedly from the sort of academic omniscient to first person to third. “I think that this key of spatial variables…” is followed in the next sentence by “However, we should also keep in mind…” Klein, too, uses “I” and “we,” though not as Manovich to claim responsibility for a project. Instead her “I” is narrative where her “we” and “us,” is meant to include the reader, who is presumably a scholar in a similar field. “I borrow this conceptual model…” and “Specifically, it allows us, as scholars…”

Although, if you haven’t figured it out, I prefer Klein’s writing to Manovich’s, I like that Manovich uses footnotes, better than Klein’s endnotes. The journal requires Chicago Style, which I like, too, because despite the endnotes forcing a lot of flipping of pages, especially if they’re interesting like Klein’s, reveal authors’ first names in the references. Manovich appears to be using APA, favored in the sciences, which renders authors’ first names as initials. I care a lot about gender in scholarship, so having a way of guessing authors’ gender identities is useful to me. And as a librarian, I’m in favor of as unique author identifiers as possible.

As I’ve devolved into a more personal style in this provocation, let me also say that I loved Manovich’s identifying an index as a early visualization tool. But on a larger level, I find Klein’s exploration of archival absence more compelling that Manovich’s sort of literature review of visualization history and tools–even if I get annoyed at scholars Columbusing archives and claim new truths that are things librarians and archivist have been discussing for a billionty years, like the concepts of absence and neutrality in archives: selection, organization, description, preservation, context, and access. Many scholars, including Klein, on occasion, seem to emphasize preservation over the other work that archivists do. She does reference archival labor and the importance metadata (praise a deity!), where Manovich does not address where data comes from, what is included or excluded, and in general all of the humans and choices behind it. 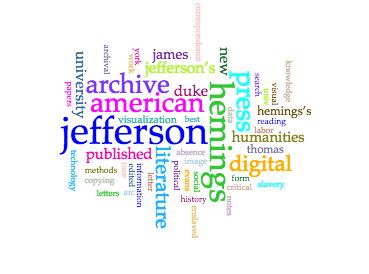 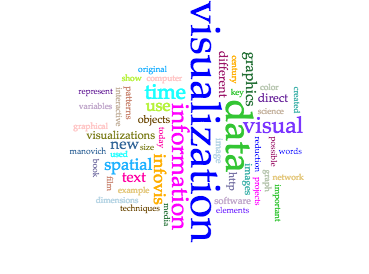 To end my provocation, I share a word cloud (discussed by Manovich) of each work and invite you to draw conclusions about the texts, as informed by your interpretations of this week’s texts distant reading and information visualization, as well as to comment on what I’ve written (and if I got the concept of textual analysis close to right!).